The contents of a .map file ('mapfile') are used by MapServer for configuration, data access, projection, and more. Because the mapfile is parsed every time a map image is requested, it is important to think about what you include in the file in order to optimize performance. The optimal mapfile is one that doesn't include or reference anything that isn't needed. The following steps will help you both manage and optimize your mapfiles.

As you optimize your setup, it is strongly recommended to review the security steps for the MAP= call to the MapServer executable, by setting MS_MAP_PATTERN or MS_MAP_NO_PATH or hiding the MAP= parameter on public servers, as recommended in the document Limit Mapfile Access. All possible environment variables to secure your server are listed in Environment Variables.

1. Use a MapServer Syntax file for your Favorite Text Editor¶

Although it's maybe not be classed as an 'optimization', using a syntax file to add color-coding to MapServer mapfile parameters in your text editor, can help save you time and make your MapServer-mapfile-management-life much easier. You can find a helpful list of these syntax color-coding tools for MapServer listed on the page at Mapfile Editing. 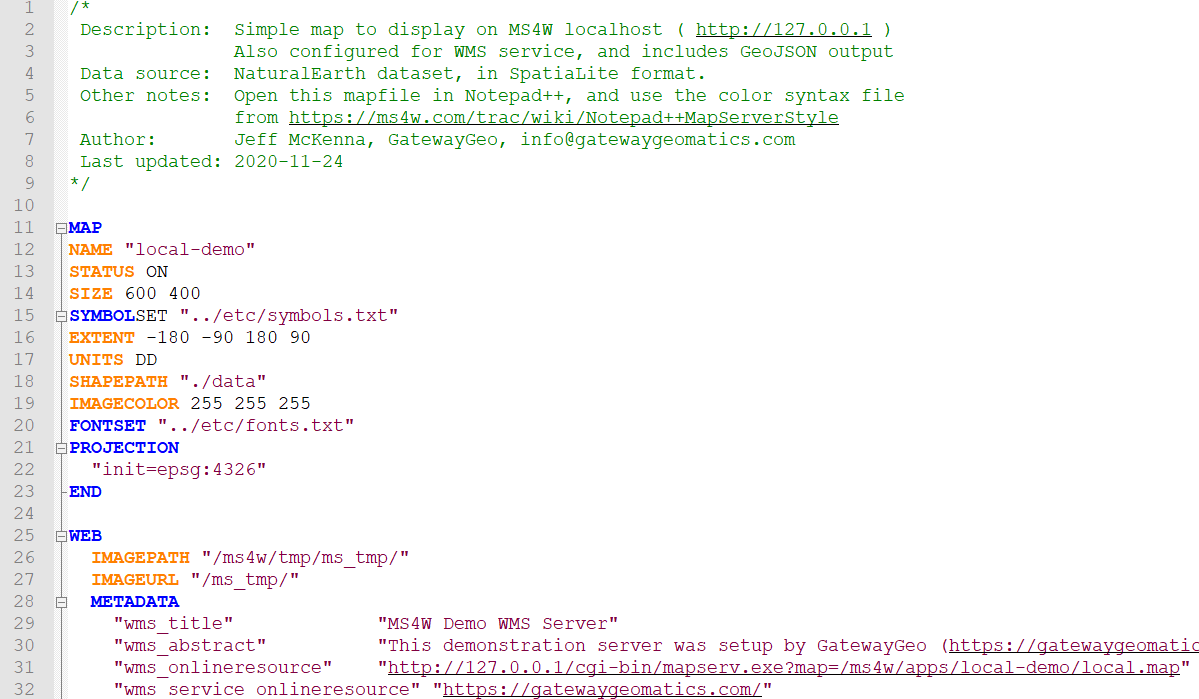 2. Testing your Mapfile for Speed¶

If optimization and performance are important to you, then get to know and love the MapServer commandline utility shp2img. shp2img will verify that your mapfile creates a valid map image, but it can also display draw times (length of time it takes MapServer to process each layer and the final map image) with the -map_debug 3 setting:

The above example generates a map image in 0.772 seconds.

Hint: If you want maximum (verbose) messages, try the -all_debug 5 setting instead.

You can also just get draw times for a single layer with the -l layername switch, such as:

shp2img should be included in your MapServer installation (MS4W users need to execute setenv.bat before using the utility).

3. Use the various CONFIG settings for debugging¶

Review the Debugging MapServer document and try setting the CONFIG parameter at the MAP-level in your mapfile, to hopefully get more information from various sources such as from the PROJ library, GDAL library, etc.

There are times when your mapfile generates a valid map image with a local shp2img command, but then the same mapfile will cause an error in a map request through the web server, such as Apache. It is these times when you should try the same request, that was sent through your web server, at the commandline with the actual mapserv (or on Windows, the mapserv.exe) utility.

The following request will take a full MAP=...&MODE=map request, and try to save the request to an image, or report an error:

You can use this to also test problematic WMS GetMap requests as well:

Note: Besides checking your web server logs, you can also use QGIS to get the exact request to your OWS (WMS/WFS etc.) service: see https://github.com/mapserver/mapserver/wiki/Get-the-Raw-WMS-Request-Generated-by-QGIS

Implemented back in MapServer 4.10, the mapfile INCLUDE parameter is possibly one of the best ways to help manage your large mapfiles (you might argue that this is not 'optimization' for speed again, but for it is very important for managing large mapfiles with many layers).

Any part of the mapfile can be referenced through an INCLUDE, besides the obvious layers.

For every layer in a mapfile that has a status of ON or DEFAULT, MapServer will load that layer and prepare it for display, even if that layer never gets displayed.

But it would be a lot more efficient to do this, since 98% of cases will be matched on the first try:

This is often not written in documents, yet is often taught in hands-on workshops (as maybe readers or developers can be reading the document here and become offended if it differs in their thinking or the purpose of their software design, as some formats may be deemed 'uncool' by some crowds, but in reality, we don't care about coolness here, we care about making MapServer fast). So the following advice is by the authors of this document (disclaimer), and may offend some readers, therefore 'viewer discretion is advised'.

Although MapServer can read any GDAL supported vector or raster source (and the fact that not all users will be setting up tile caching beforehand), the following is still recommended for MapServer for optimal performance in terms of data formats.

For Windows users, MS4W includes the shp2tile utility, and all utilities mentioned above.

If your mapfile serves any OGC-related service (such as WMS, WFS, etc.) you should consider enabling MapCache, an Apache module, for your services. Caching common map results (as an image file, or inside a SQLite db for example) for common map extents, will obviously drastically improve speed, and cancel-out any format discussions/benefits/arguments mentioned above.

When the mapfile is loaded, each raster symbol listed in the symbols file is located on the filesystem and loaded.

To load a font, MapServer opens up a lookup file (often named fonts.list or fonts.txt) FONTSET which contains an alias for the font and the path for that font file. If you have a fonts.list file with a long list of fonts, it will take more time for MapServer to locate and load the font that you need.

MapScript, in your favorite language such as PHP or Python, can be used to manipulate mapfiles on-the-fly. Some common use cases are:

The options here are limitless, for what you can do with MapScript. The full list of available parameters and functions (methods) are listed in the SWIG MapScript API Reference.

This is more obvious if your mapfile serves OGC services, such as set in the wms_onlineresource metadata parameter in your WEB object, which by default must contain the MAP=path/to/your/mapfile, but exposing paths on your public server can open you to possible malicious attacks on your filesystem. You should take some time to review the possible steps in the document Limit Mapfile Access.